This blog will introduce various metals industry encoder applications and discuss typical challenges.  These challenges can be grouped into Environmental Challenges and Mechanical Duty Challenges.

The reasons why optical encoders fail to overcome the challenges found in metals applications will be discussed.

Optical encoders, which have been used in metals applications for many years, never met the demanding reliability requirements of the metals industry. Quite simply, optical encoders are vulnerable to myriad kinds of damage:

Most styles of optical encoders come sealed from the factory. Over time temperature cycling causes pressure changes and seals fail, which creates a path to the inside of the encoder. Often, the cause of the problem is simply moist air which enters the encoder and then condenses, rains, or freezes inside the encoder.

Optical encoders use an internal, stationary light source, usually an L.E.D., to shine light through a rotating disc (rotor) containing machined slots or etchings. A mask of light sensors detects the resulting shadow and light bars and creates the pulses as shown in the figure below. 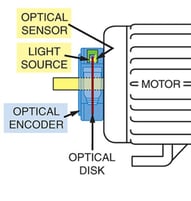 But over time, dirt and water inevitably penetrate the encoder causing the rotor slots or etchings to lose their precision.

Sealed “Tighter than a Drum” is Good……Right?

Environmental protection ratings are then used to classify the encoder against the ingress of foreign contaminants. The two-digit IP (International Protection) Rating classifies the degrees of protection provided against the intrusion of solid objects like dust and water in electrical enclosures.

But when temperature and, especially, temperature cycling, enter the equation, tightly sealed encoders and the IP rating methodology are quickly proved invalid.

So the challenge for the encoder designer is to design an encoder that can withstand the adverse effects of dirt and water penetration while at the same time breathing so that condensation caused by temperature cycling is eliminated.

The internal positioning and alignment will have a direct effect on the shape of a single pulse and the pulse-pulse relationship of the encoder output. This will result in deterioration of the ideal pulse characteristics shown in the diagram below: