This blog will discuss why magnetic encoders overcome limitations and provide superior reliability in metals applications.

Encoder manufacturers have made great strides in recent years to overcome the severe encoder reliability problems that have plagued metals mills for many years.  No greater improvement has been made than the replacement of optical sensing technology with magnetic.

A magnetic encoder has a solid rotating disk which is magnetically etched with adjacent north/south poles.  These poles create lines of magnetic flux between them and these lines of flux are what the sensor “sees” to create the pulses.  A stationary sensor using resistors that are sensitive to magnetic fields “reads” the passing poles to generate the pulses. 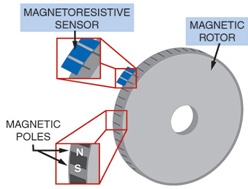 The real improvement comes from the magnetic sensing being able to withstand internal contamination inside the encoder.  Magnetic technology enables the sensor to "see" even when conditions inside the encoder look like a rainstorm of dust, oil or water.

An early limitation of magnetic sensing came from the limited air-gap distance and tight tolerance required between the rotating disk and the stationary sensor.  This gap is a function of both the magnetic strength of the poles etched in the rotor and the sensitivity of the sensor to see the resulting flux lines moving past.  Due to limitations with early etching and magnetically sensitive resistors, the nominal air-gap in early models was typically 0.008”.  This proved difficult to maintain.

These limitations in pole strength and resistor sensitivity combined to limit the allowable range of pulse/revolution values to 1,200.  As metals industry controllers got more powerful, higher pulse rates were desired for improved performance but could not be initially attained with magnetic encoders.

Over time, advances in materials properties allowed the magnetization of the rotor poles to become stronger.  This resulted in maximum air-gap specs growing to 0.065” and allowable shaft runouts of 0.004” TIR.  This enhanced the tolerance of the encoder to vibration and wobble resulting in a more robust, longer-life encoder.

The improvement was enabled by a combination of improved Ferro-polymer materials properties available for the magnetic ring and stronger magnetization etching provided from improved IR technology. This allowed the magnetic poles to be etched stronger per unit polymer cross-section.  The improvements in the allowable air-gap grew from the earlier 0.008” to 0.030” and finally to the current 0.065”.

The solution came from an improved magnetic flux sensing algorithm.  Early sensor technology followed the optical model of ON/OFF equaling PULSE and the sensor had a threshold for reading the magnetic pole as either ON or OFF.  The improvement came from the sensor being able to read the relative strength of the magnetic line of flux as it passed the sensor head.

An improved sensor was designed to continuously read the flux strength between the poles instead of just considering it present or not present.  Now the sensor knew the exact rotor position continuously instead of just once per pole pair.  Once this was determined, the sensor could create more pulses at the correct rotor position.  This allowed the encoder to have higher pulse rates.  There are current magnetic models available with up to 5,000 pulse/revolution outputs.